North Shore Hebrew Academy High School regularly presents fascinating assemblies featuring expert speakers across a multitude of subjects. Running the gamut from soldiers serving in the Israel Defense Force sharing their real life experiences to a criminal defense attorney giving words of wisdom as an orientation for life, the speakers reach out to our students with their deep knowledge and how it affects life in the Jewish culture as the students move into their future.
___________________________________________
Zionist Organization of America (ZOA) Speaks @ NSHAHS  12/11/18 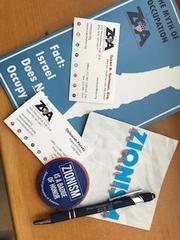 Very interesting and informative lecture from ZOA - Zionist Organization of America - today in Ms. Rozanski’s senior classes discussing anti-Semitism on college campuses. Founded in 1897, the Zionist Organization of America (“ZOA”) is the oldest pro-Israel organization in the United States. With offices around the country and in Israel, the ZOA is dedicated to educating the public, elected officials, media, and college/high school students in their commitment to finding solutions to and methods of handling anti-Semitism, as well as promoting strong U.S.- Israel relations. In addition, ZOA not only works to protect Jewish college and high school students from anti-Semitism but also from intimidation, harassment and discrimination. The speakers were Susan Tuchman - Director, ZOA Center for Law and Justice and Deborah Peretz - Regional Director, Long Island ZOA. For more information contact Ms Rozanski or go to the website https://zoa.org/﻿
____________________________
Brigadier General Avigdor Kahalani at North Shore!

North Shore was greatly honored by a visit from Israeli war hero, Brigadier General Avigdor Kahalani. He spoke at great length of his life in the IDF including stories of his experiences in both the Six-Day War and the Yom Kippur War.  The general was introduced by North Shore senior Aiden Kahalani - a cousin of the general.
General Avigdor Kahalani was born in Ness Ziona, in central Israel in 1944. He studied mechanics at the ORT School in Jaffa, gained a B.A. in History from Tel Aviv University and an M.A in Political Science from Haifa University. In addition, he attended the Command and General staff College at Fort Leavenworth, Kansas, and graduated from Israel's National Defense College.  General Kahalani was conscripted into the IDF in 1962 to later become a career officer..
During the Six-Day War, General Kahalani commanded a company of Patton tanks where he was badly wounded when his tank caught fire and was awarded the Medal of Distinguished Service. He was told his career was over due to his severe burns. However, when the Yom Kippur War broke out in 1973, he served as commander of the 77th Armored Battalion. He and his soldiers engaged in fierce defensive fighting against a superior Syrian force, consisting of more than 50,000 men and 1,200 tanks. The battle was one of the major turning points of the war. When the war ended, the valley where they fought was littered with hundreds of destroyed Syrian tanks and renamed "Emek Ha-Bacha"  ("The Valley of Tears"). For his heroic actions in the war, General Kahalani was awarded the highest Israeli military decoration - the Medal of Valor.
After leaving the IDF, General Kahalani went into politics where he served as Deputy Mayor of Tel Aviv, was elected to the Knesset as a member of the Labor Party, served on the Knesset Foreign Affairs and Defense Committee and the Education and Culture Committee, and was later made Minister of Internal Security under Prime Minister Binyamin Netanyahu's coalition. He is a member of the Committee for the Rescue of Jews from Yemen and Chairman of the Golan Lobby in the Knesset. He is also Chairman of the Friends of LIBI Foundation and President of the Israeli Association for Drug
Rehabilitation.
Since November 2007, General Kahalani has been serving as Chairman of the Organization for the Soldier and travels to do speaking engagements.
Thank you General Kahalani for an amazing, captivating and humbling visit and the sharing of your extraordinary experiences. Enjoy the photos below.
___________________________________________
Martin Greenfield , Master Tailor and Author of 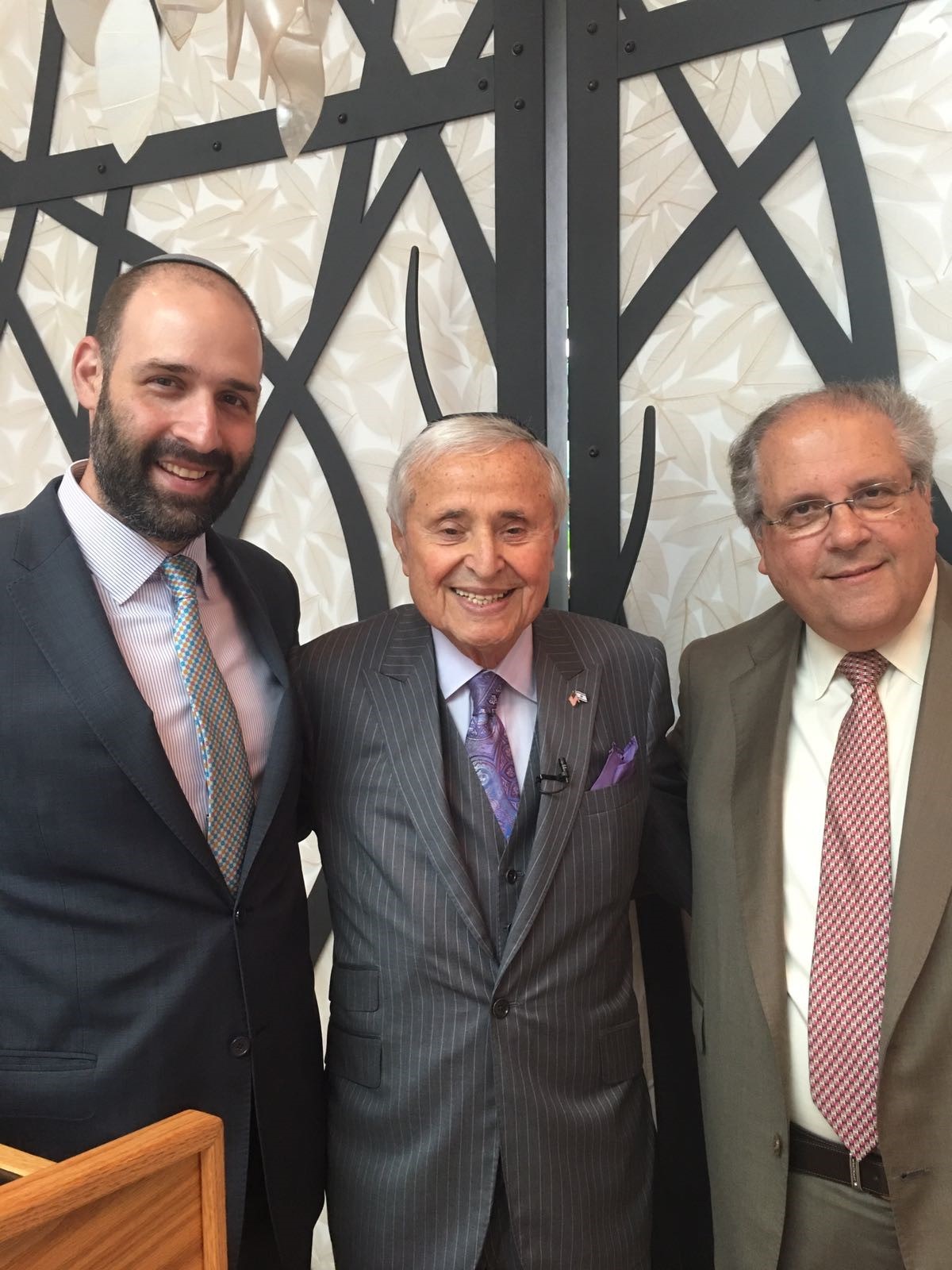 "Measure of a Man:
From Auschwitz Survivor to Presidents' Tailor"
Rabbi Dr. Noam Weinberg-Principal, Mr. Martin Greenfield, Dr. Daniel J. Vitow-Headmaster
On May 1, 2017, North Shore had the extreme honor of hearing Martin Greenfield speak of his life from childhood in Czechoslovakia and Hungary to being moved with his family to Auschwitz concentration camp where he was put to work as a tailor. He eloquently told of the experience of his survival as a prisoner, of liberation and of asking an army chaplain, a rabbi, "Where was G-d?", and of searching for his family to no avail. He spoke of having met General Dwight D. Eisenhower during the liberation, and later, in America, making a suit for him when he was running for President. At age 19, he boarded a ship bound for America, began his journey with virtually nothing and created an amazing successful and happy life as the tailor to the Presidents and many other famous celebrities and politicians. He is a remarkable man who described how his grandfather taught him to always smile no matter what and to always be the very best at whatever he chose to do in his life. He is still smiling as he shared this lesson and his extraordinary story. Dr. Vitow purchased hundreds of copies of Martin Greenfield's book "Measure of a Man: From Auschwitz Survivor to Presidents' Tailor", for everyone to remember this profound experience.
Video clip from Mr. Greenfield's speech to the school. 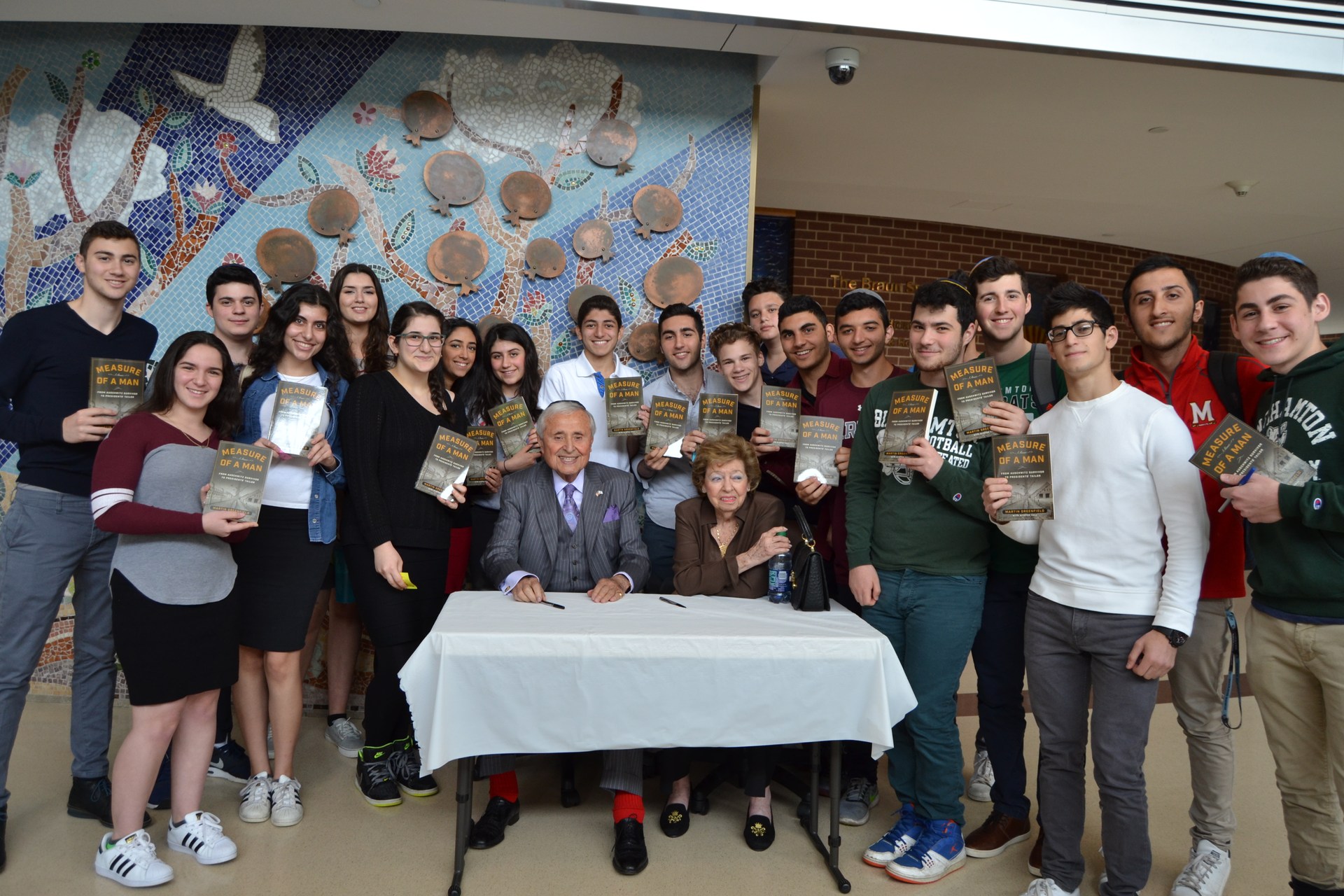 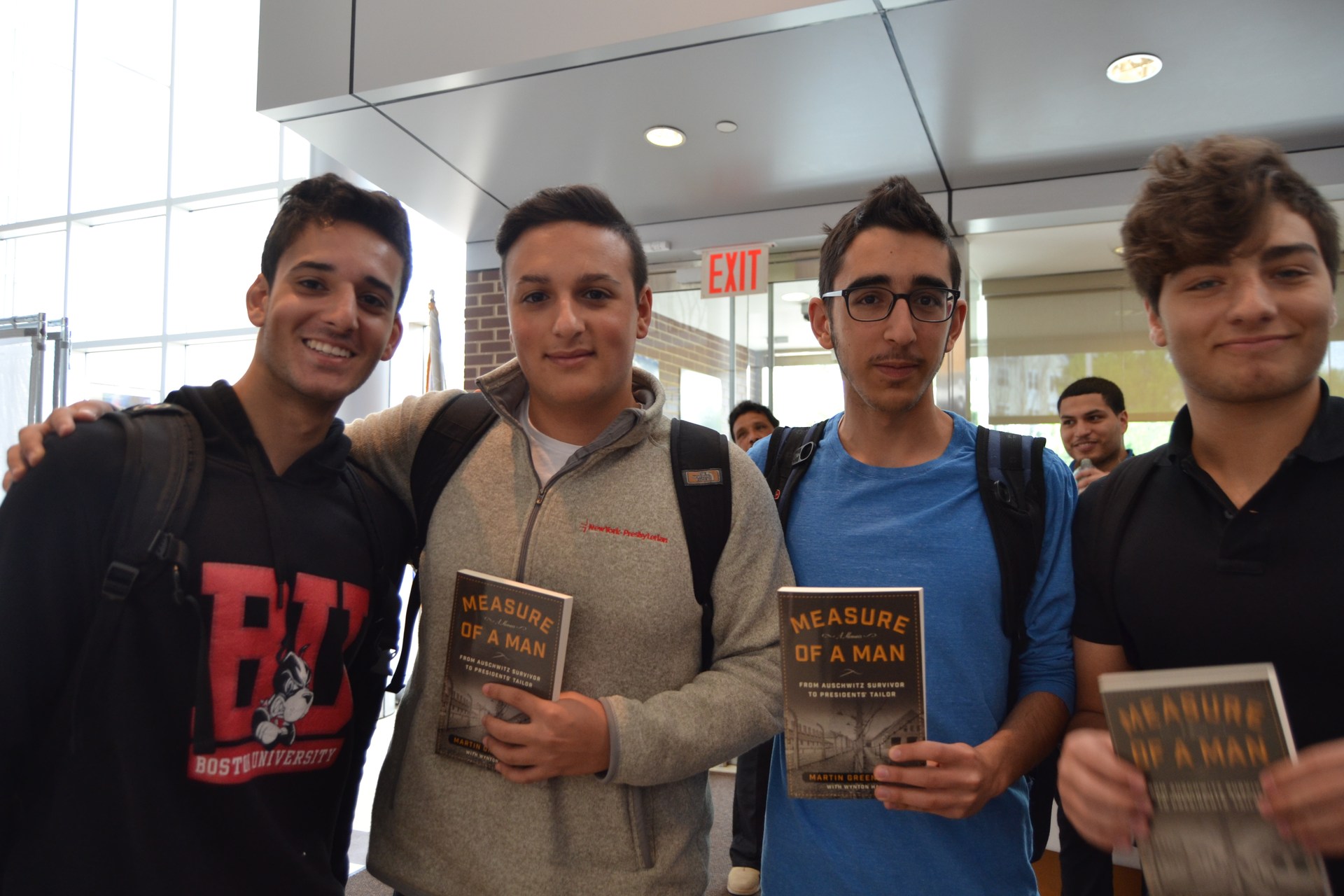 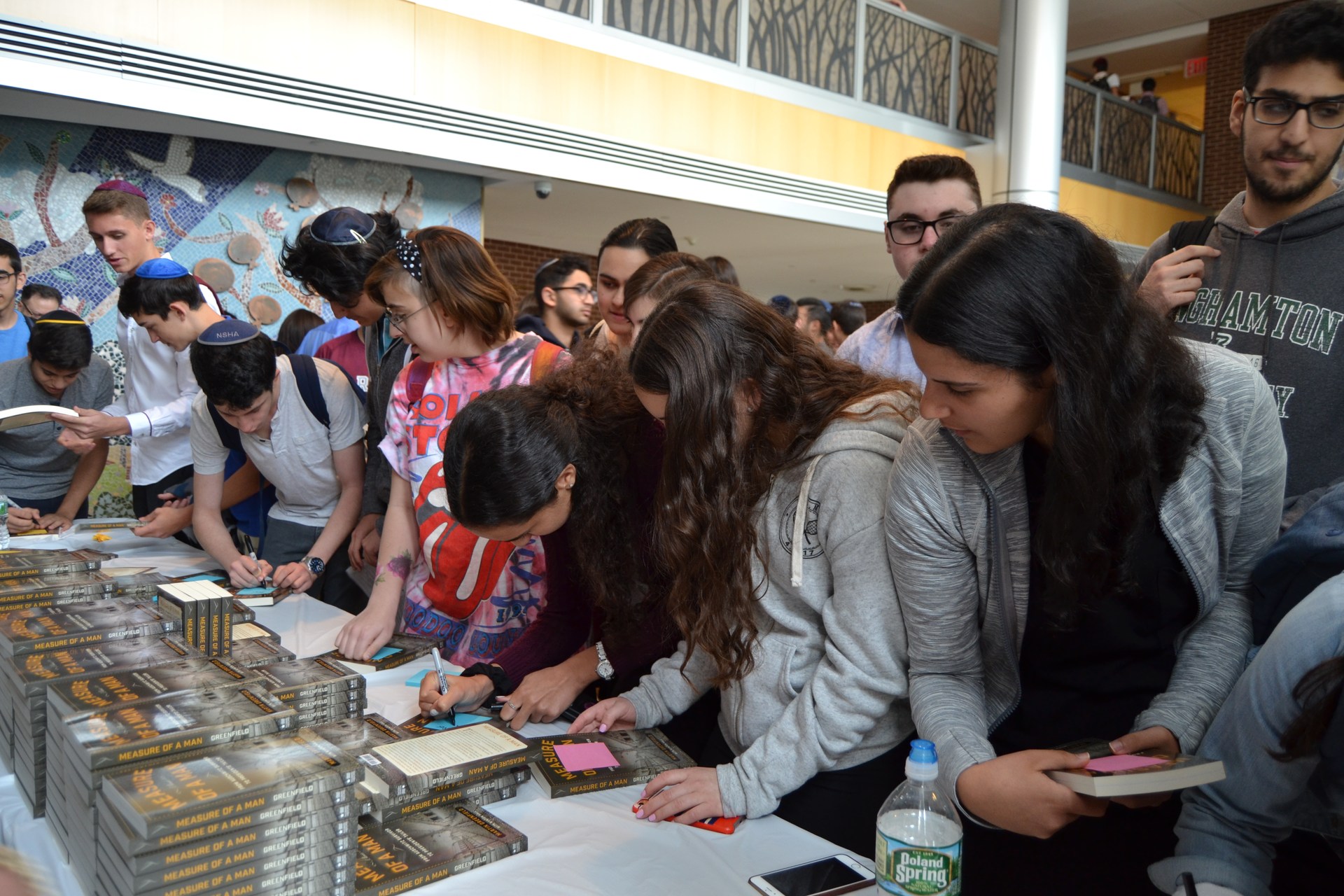